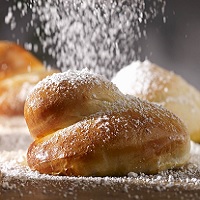 Brioche is a French bread with a thick and soft crumb due to its high egg and butter content. “Light and slightly puffy, more or less fine, depending on the percentage of butter and eggs,” chef Jol Robuchon said. It has a dark, golden, flaky crust that is often enhanced by an egg wash after proofing.

Brioche is classified as a Viennoiserie because it is created in the same way as bread but has a deeper flavor due to the addition of eggs, butter, liquid (milk, water, cream, and, rarely, brandy), and sugar. A leavened subgroup of Viennoiserie includes brioche, pain au lait, and pain aux raisins, which are typically consumed for breakfast or as a snack. Brioche is frequently eaten on its own or as the base of a dessert, with various local variations in added ingredients, fillings, or toppings.

Brioche can be eaten plain or filled, as coulibiac, or with a variety of savory fillings, such as beef en croute, foie gras, sausage, or cervelat lyonnaise. Brioche can also be filled with sweet ingredients such as fresh fruits, vanilla cream, or jam.

Brioche à tête, also known as Parisienne, is baked in a fluted round, flaring tin with a large ball of dough on the bottom and a smaller ball of dough on top to form the head (tête). Brioche Nanterre is a brioche loaf baked in a regular loaf pan. Instead of forming two pieces of dough and baking them together, the pan is filled with two rows of little bits of dough. In the pan, the loaves are proofed (left to rise), fusing the parts together. The dough balls r ise even further throughout the baking process, forming an appealing pattern.

To make an ordinary loaf, brioche can alternatively be made in a pan without being rolled into balls.

Brioche dough is made out of flour, eggs, butter, liquid (milk, water, cream, and occasionally brandy), leavening (yeast or sourdough), salt, and sugar. The flour to butter ratio in most recipes is around 2:1.

The traditional technique of preparation is to create the dough, let it rise to double its volume at room temperature, then punch it down and place it in the refrigerator for varying amounts of time (depending on the recipe), allowing the flavour to develop. [8] Refrigeration stiffens the dough, which rises slowly but steadily, making it simpler to shape. The dough is then moulded, placed in containers for final proofing, and sprayed with an egg wash before baking at 230°C (446°F) until the crust browns and the internal temperature reaches at least 90°C (194°F). For small rolls, the first rise time is 1 to 112 hours; for larger brioche, the time is increased until the loaves double in size.