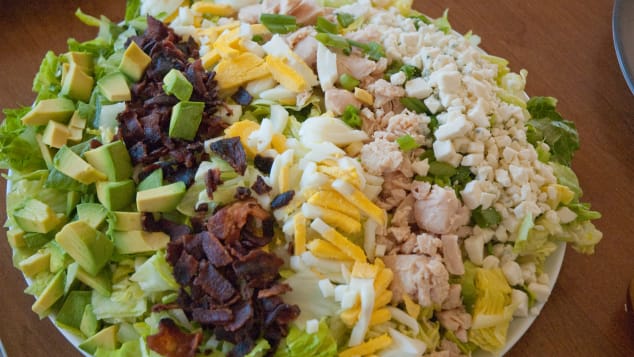 The origins of the salad have been told in several ways. It is said to have originated in 1938 at the Hollywood Brown Derby, where it became a signature dish. It’s named for Robert Howard Cobb, the restaurant’s proprietor. Cobb or his chef, Paul J. Posti, is credited with inventing the salad, according to legend. Cobb had not eaten since around midnight, according to folklore, so he tossed leftovers from the kitchen, along with bacon prepared by the line cook, with their French dressing.

According to another version of the story, the salad was invented in 1929 (the year the Brown Derby’s Hollywood outpost opened) by Robert Kreis, the restaurant’s executive chef, and named for Robert Cobb. The same source confirms that the above-mentioned version, in which Cobb prepares the salad, was published in 1937.

The Cobb salad is traditionally made with four types of greens: iceberg lettuce, watercress, endive, and romaine lettuce.

Other types of cheese, such as cheddar or Monterey Jack, or no cheese at all, are used in some recipes instead of Roquefort.