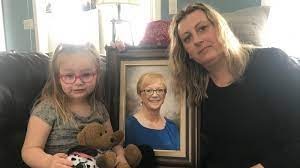 A woman from Nova Scotia claims that after waiting in the emergency room for seven hours before giving up, her mother-in-law passed away after leaving.

She is currently gathering testimonies from Nova Scotians who have had similar experiences in an effort to bring about reform in the healthcare system in the province.

Katherine Snow from Port Caledonia in Cape Breton remarked, “I did not believe I would be sitting in this chair yesterday morning, maybe campaigning for better health care.”

“But I’ll do it for my mother-in-law and for my daughter, who is missing her nan,” the speaker continued.

Charlene had been sick in bed for days, according to Snow, and she didn’t want to wait in line after hearing about congested hospitals in recent weeks.

But that Friday, she “mustered up the energy to go.”

She was there by herself, so we kept in touch frequently. My spouse proposed that they sit together inside. She said, however, that there were no seats available for anyone to have a seat and keep her company because the room was so filled.

After waiting for seven hours, the 67-year-old gave up and asked her husband Freddie to drive her home, according to Snow.

She explained, “It just got too uncomfortable for her.” She made the decision to leave and try her luck the following morning at the neighbourhood outpatient clinic.

Just an hour after leaving the hospital, Charlene’s heart stopped, meaning she wouldn’t make it to the following morning.

The relatives of Charlene Snow identified her as the matriarch and “glue” of the family in the obituary. Her “very kind heart, amazing wit, and irresistible laugh” are remembered.

In the previous 12 days, her family has gone through various stages of mourning.

“We undoubtedly felt shocked, followed by grief. And right now, I believe we’re in the phase where we’re angry.

Minister Michelle Thompson stated in an email from the Nova Scotia Department of Health and Wellness that she was “very grieved” to learn of Charlene’s demise.

“I want to send the family my heartfelt thoughts and condolences during this trying time.”

Katherine Snow reported that her family requested a review of what transpired that evening through a patient advocate department. She received a note from an ER doctor at the Sydney hospital just before speaking with Global News informing her that they are looking into it.

We simply need to know what occurred, she said. “Knowing that everything that might have been done was done would give us comfort. If not, we want to know why actions that may have been taken weren’t.

Because it happened so quickly, “it’s a significant part of the grief process for us.”