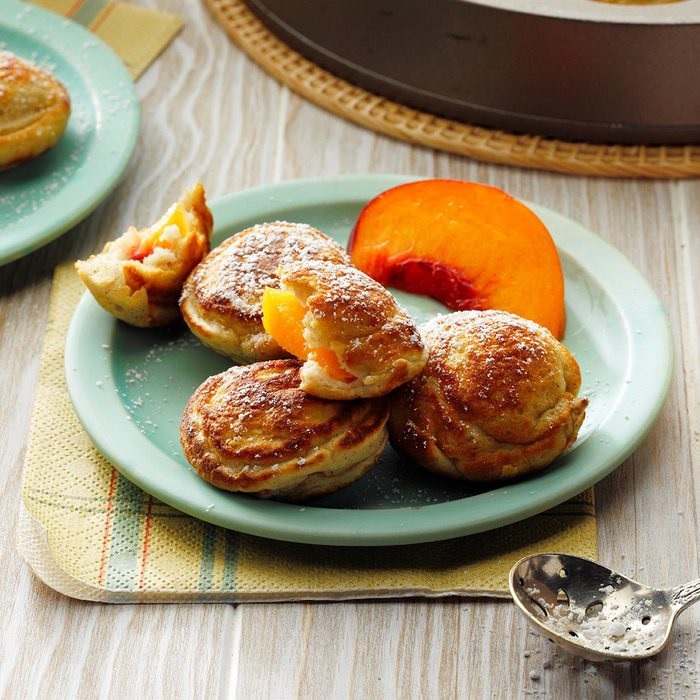 Aebleskiver (or Ebelskiver) are puffy Danish pancake balls that are served as a traditional Danish dessert during the Christmas season. Enjoy them as a delectable morning treat all year long!

Whether you call them Aebleskiver or Ebelskiver (same pronunciation, different spelling), the Danish word for them is Bleskiver, which means “apple slices” or peach slices because they were historically created with a small slice of apple or peach in the center while cooking. However, according to what I’ve read, the habit of putting apple slices in the center of Aebleskiver has faded in Denmark and is no longer widespread.

Aebleskiver isn’t hollow in the middle, despite their lightness and fluffy appearance. The pancake balls are turned with a knitting needle (the traditional instrument used by Danes for turning Aebleskiver), chopstick, or wooden skewer while the batter puffs up in a special Aebleskiver pan.

The golden-brown sphere that results in tastes like a delightful hybrid between a pancake and a doughnut, but it’s slightly airier and lighter than either.

Before being served with honey or jam, the cooked Aebleskiver is coated with powdered sugar.