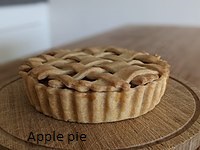 Apple pie is a pie using apples as the main filling ingredient that originated in England. Whipped cream, ice cream (“apple pie à la mode”), or cheddar cheese are common toppings. It’s usually double-crusted, with pastry on both sides of the filling; the top crust might be solid or latticed (woven of crosswise strips). To keep the bottom crust from being soggy, bake it separately (“blind”). Deep-dish apple pies frequently have only the top crust, while tarte Tatin is baked with the crust on top but served with it on the bottom.

Apple pie is an unofficial icon of America and one of the country’s distinctive comfort meals.

Many different types of apples can be used to make apple pie. Braeburn, Gala, Cortland, Bramley, Empire, Northern Spy, Granny Smith, and McIntosh are some of the most popular cooking apples. Fresh fruit, canned fruit, or dried apples can all be used in the pie. Originally, dried or preserved apples were used exclusively when fresh fruit was unavailable. Sugar, butter, and cinnamon are commonly used in the filling, with lemon juice or nutmeg added occasionally; many older recipes call for honey instead of the then-expensive sugar.

Apple pie is frequently served à la mode, that is, with ice cream on top. A slice of sharp cheddar cheese is placed on top of or alongside a slice of finished pie in another serving manner. Apple pie with cheddar is a popular dessert in the Midwest and New England, especially in Vermont, where it is the state dish. Wensleydale cheese is popular in the north of England.

A commercially produced apple pie has 52 percent water, 34% carbs, 2% protein, and 11% fat (table). With no other micronutrients in considerable content, a 100-gram portion provides 237 calories and 13% of the US recommended Daily Value for sodium.