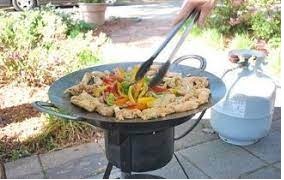 Despite its origins in Northern Mexico, Discada is a popular dish throughout the country. Discada is a combination of grilled meats (often sausage, chorizo, ham, bacon, and flank steak, though other meats may be used depending on location), onion, pepper, jalapenos, and occasionally cheese. The metal discs (Discada, which means “disc”) that are used to produce this meal are typically employed in agriculture, which is what makes it so unique.

How to Make Discada