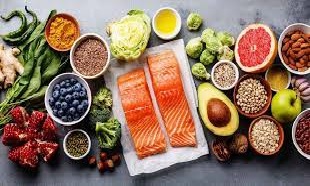 The following are some examples of meals and drinks that have been associated with decreased inflammation and a lower risk of developing chronic diseases:

Numerous anti-inflammatory activities of polyphenols have been demonstrated through studies. A review article in the British Journal of Nutrition detailed a number of studies that appeared to support the idea that dietary polyphenols may reduce inflammatory responses in the body. And enhance blood vessel lining cell function. Onions, turmeric, red grapes, green tea, cherries, and plums are foods high in polyphenols, as are dark green leafy vegetables like spinach, kale, and collard greens.

Omega-3 fatty acids, which have long been demonstrated to reduce inflammation, are also present in healthy amounts in foods like olive oil, flaxseed oil, and fatty fish like salmon, sardines, and mackerel.

The same foods that cause inflammation are also typically thought to be detrimental to other areas of health. These include red meat and processed meats, as well as sweetened sodas, refined carbs (such as white bread and pasta), and red meat.

Such unhealthy diets may also lead to weight increase, which is a risk factor for inflammation in and of itself. The emulsifiers added to ice cream, for example, are a processed food element that may have an impact on inflammation.

The key to reducing inflammation with diet

Instead of focusing on specific “good” and “bad” foods, it is recommended to concentrate on eating a balanced diet as a whole to practice anti-inflammatory eating. In general, a healthy diet includes prioritizing fruits, vegetables, nuts, whole grains, and fish. And healthy fats while limiting foods high in simple sugars, high-fructose corn syrup, and refined carbs. Examples of these foods and drinks include soda, candy, juice, and sports drinks.