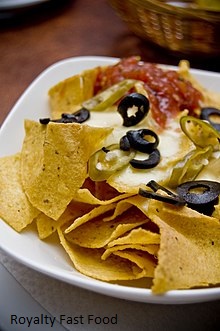 Nachos are a Mexican regional food from northern Mexico that consists of heated tortilla chips or totopos that are coated in melted cheese (or a cheese-based sauce) and are commonly served as a snack or appetizer. Other ingredients are included in more sophisticated versions of the meal, which may be substantial enough to serve as a full course. In 1940, Ignacio “El Nacho” Anaya invented the dish. Fried corn tortilla chips were coated in melted cheese and sliced jalapeno peppers in the original nachos.

Nachos originated in Piedras Negras, Coahuila, which is just across the border from Eagle Pass, Texas. When Mamie Finan, a regular diner, asked if Anaya could bring her and three other women a different snack than usual, he created nachos at the Victory Club in 1940. Anaya stepped into the kitchen and saw freshly fried corn tortilla pieces. He added melted cheese and pickled jalapeno strips after a stroke of culinary genius. Anaya divided the tortillas into triangles, fried them, topped them with shredded Colby cheese, quickly heated them, and served them with sliced pickled jalapeno peppers. Finan inquired about the snack’s name after sampling it. “Well, I guess we can simply call them Nacho’s Special,” Anaya replied.

The dish’s popularity quickly spread across Texas and the Southwest. The word “nachos” first appeared in the English language in 1950, in the book A Taste of Texas. [8] Carmen Rocha, a waitress at El Cholo Spanish Cafe, is credited with inventing nachos in San Antonio, Texas, before introducing the meal to Los Angeles in 1959.

In 1976, Frank Liberto, proprietor of Ricos Products, promoted a modified version of the dish with cheese sauce and prepared tortilla chips at Texas Rangers baseball games at Arlington Stadium in Arlington, Texas. “Ballpark nachos” was the name given to this rendition. Sportscaster Howard Cosell enjoyed the name “nachos” during September 4, 1978, Monday Night Football game between the Baltimore Colts and the Dallas Cowboys, and made a point of mentioning the dish in his broadcasts over the following weeks, further popularising it and introducing it to a new audience. Liberto passed away in 2017.

In 1975, Ignacio Anaya passed away. A bronze plaque was built in his honor in Piedras Negras, and on October 21 was named International Nacho Day. Ignacio Anaya, Jr., Anaya’s son, was a judge at the annual nacho tournament.

The nutritional breakdown and overall calorie count for a serving of nachos are usually determined by the type of nacho, type of cheese, and other toppings (such as meat, jalapenos, etc.) included in the serving. The average corn tortilla chip has roughly 15 calories per serving. Corn tortilla chips baked in the oven have only 6 calories per chip, making them a better alternative to fried chips. Per ounce, Mexican-style cheddar cheese has roughly 110 calories. Adding another protein source, such as chicken or beef, raises the calorie total by around 100 calories. A single dish of nachos can contain anything from 300 to 600 calories.

A quartered and fried tostada with a layer of refried beans or various meats, a layer of shredded cheese or nacho cheese, and habanero hot sauce is one version.

Barbeque nachos (in which the cheese is substituted with barbecue sauce) and poutine nachos are two further varieties (in which cheddar cheese is replaced with cheese curds and gravy). Despite the use of non-traditional ingredients, these variations are still considered nachos. Pulled pork nachos, often known as barbecue nachos, are particularly popular in the Southeast. The nachos maintain their cheese and, in certain cases, jalapenos, but are now topped with pulled smoked pork shoulder, which can be served with or without barbecue sauce or hot sauce. In some Irish-themed restaurants and bars, “Irish Nachos” are served instead of tortilla chips, with toppings poured over potatoes (French fries).

As Anaya did, traditional nachos consist of tortilla chips topped with cheese and jalapenos. Nachos in their current form can be topped with a variety of toppings, including cheese, guacamole, salsa, sour cream, jalapenos, and occasionally lettuce. If lettuce is used at all, it is a rare addition. The cheese is frequently the most abundant topping.

“Loaded nachos” refers to nachos with an abundance of toppings. In the United States and worldwide, this dish is typically served as an appetizer in pubs and restaurants. Typically, tortilla chips are put on a tray, followed by meat and refried bean toppings, and finally, shredded cheese is smeared over the entire platter. The tray is then placed in the broiler or microwave to melt the cheese. The cold toppings (shredded lettuce, tomatoes, salsa, jalapenos, etc.) are then placed on top of the tray and served immediately.

Barbecue nachos are provided in most barbecue restaurants in Memphis, Tennessee, as well as at sporting events. Served with melted cheddar or nacho cheese, barbecue sauce, and sliced jalapeno peppers, generous chunks of barbecued pork shoulder are put atop tortilla chips.

Many restaurants and bars in Hawaii serve kalua pork with pineapple nachos. Toasted tortilla chips are topped with kalua pork and pineapple chunks, then melted cheese or nacho cheese, and a variety of toppings.

In Tex-Mex restaurants, a similar meal with tortilla chips and cheese is available. As an appetizer, small bowls of chili con queso or, more typically, salsa are served alongside baskets of warm tortilla chips.

National Nacho Day is observed on November 6 in the United States. The International Nacho Festival takes place in Piedras Negras, the origin of nachos, from October 13 to 15, and includes live music, art, cultural events, and a contest for the world’s largest nacho, which is registered with Guinness World Records.