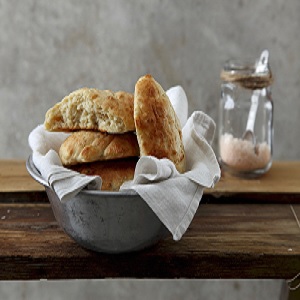 Pita or pitta is a family of yeast-leavened round wheat flour flatbreads popular in the Mediterranean, Middle East, and nearby regions. It comprises pocketed versions, such as Arabic bread, Syrian bread, and other names, as well as pocketless versions, such as the Greek pita, which is used to wrap souvlaki. Pita is a term used in English to refer to a variety of flatbreads that have distinct names in their native languages, such as various forms of Arab khubz.

Pita has its origins in Middle Eastern prehistoric flatbreads. There is evidence that the Natufian people of what is now Jordan developed a type of flatbread from wild cereal grains around 14,500 years ago, during the Stone Age. Wheat and barley were among the first domesticated crops in the Fertile Crescent during the Neolithic period, some 10,000 years ago. By 4,000 years ago, bread was a vital part of the diet in societies like Mesopotamia’s Babylonian culture, where the earliest-known written records and recipes for bread-making are found, and where pita-like flatbreads cooked in a tinûru were a staple of the diet, similar to today’s tandoor bread or taboon bread. However, the steam-puffed, two-layer “pocket pita” is not mentioned in ancient literature or in any medieval Arab recipes, and food historians such as Charles Perry and Gil Marks believe it was a later creation.

Most pitas are cooked at high temperatures (450–475 °F (232–246 °C), which causes the dough to puff up and form a pocket by turning the water in the dough into steam. The layers of baked dough inside the deflated pita remain separated when taken from the oven, allowing the bread to be opened to form a pocket. However, “pocket-less pita” is a type of pita that is baked without pockets. Pita is proofed for a relatively short time—only 15 minutes—whether it is made at home or in a commercial bakery.

On innovative automatic lines, modern commercial pita bread is made. These plants can process 100,000-pound (45,000 kg) flour silos at a time and produce thousands of loaves every hour. Commercial baking ovens are much hotter than traditional clay ovens, ranging from 800 to 900 degrees Fahrenheit (427 to 482 degrees Celsius), hence each loaf is only baked for one minute. The pita is then air-cooled for roughly 20 minutes on conveyor belts before being exported or stored in commercial freezers at a temperature of 10 degrees Fahrenheit (12 degrees Celsius).