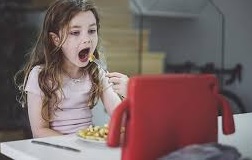 Childhood obesity is a global epidemic and public health problem with substantial morbidity, economic, and mortality costs that must be addressed, according to studies. Obesity in children has increased dramatically in the last twenty-five years, for a variety of reasons that have been explored on academic and social forums. Obesity is becoming more common among preschool children at an alarming rate.

One of the factors contributing to the rise in prevalence is the harmful impact of commercials targeting youngsters and promoting unhealthy diets on numerous media platforms. According to studies, many children spend a significant amount of time utilising various forms of media that expose them to marketing unhealthy foods. For example, advertisements for non-nutritious foods linked to obesity abound throughout media channels such as radio, television, and the internet. Food advertisements must be banned in order to avoid childhood obesity since they have a negative impact on children’s food preferences, consumption, and purchase habits.

Children are constantly assaulted with advertisements encouraging them to consume foods that predispose them to obesity. The majority of foods and beverages advertised include high levels of sugar, salt, and saturated fats, all of which are harmful to one’s health. High-calorie, low-nutrient products are presented to youngsters in a way that makes them appealing and enjoyable to consume.

Advertisements exist across a variety of media platforms, exposing children to high-calorie, high-sugar items. These advertisements play an important role in the obesity epidemic because they urge children to persuade their parents to buy unhealthy foods for them. In most situations, parents are forced to buy these meals because their children refuse to consume healthier alternatives. Advertising businesses profit from the fact that most children have their way with their parents, who buy them anything they want. This explains why children’s TV has more food advertisements than adult programming.

Obesity is increased when children are exposed to advertisements for harmful market foods. Many advertising companies target youngsters aged 8 to 12 since this is when they form dietary habits that they will take into adolescence and possibly adulthood. Children are influenced by advertisements to make food preferences and decisions based on what they see. Guran et al. found that food advertisements use a significant amount of advertising time on Turkish television. Furthermore, it was shown that the majority of the advertisements contained obesogenic meals.

The study looked at the country’s four major television networks. Food was broadcast 32.1 times over the study period, according to the report. Foods heavy in calories, fats, and sugars were advertised in 81 per cent of advertising, with chocolate, gum, fast food, tea, chocolate bars, carbonated beverages, ice cream, and margarine as the most frequently advertised products. In order to appeal to youngsters, advertisements for unhealthy products used audiovisual approaches. The study’s findings support the idea that food advertisements should be banned to reduce juvenile obesity.

When it comes to the impact of eating high-calorie foods, children are typically naive and uneducated. As a result, marketing firms target them in their commercials. Children lack the necessary judgment to distinguish between nutritious and unhealthy diets or to evaluate whether the products advertised have a beneficial or bad impact on their health and overall well-being. The fact that youngsters consume a lot of information and their parents are usually not around to regulate what they see exacerbates the problem. Many advertising companies use child stars and well-known cartoon characters to attract children’s interest.

Children learn mostly by imitating what they observe. As a result, they urge their parents to buy them certain things after witnessing their favourite child begin to consume them. Children lack the ability to tell the difference between fact and fiction. They don’t realize that advertising is made-up interpretations of reality designed to persuade consumers to buy particular things.

Companies employ four key strategies to lure children to their products, according to Harvey. They include indirectly targeting parents, outsmarting youngsters, advertising meals with components that children enjoy, and investing large sums of money.

In the report, he claims that 44 corporations spent more than $1.6 billion on advertising in 2006. This money was spent on marketing products and persuading youngsters and adolescents to buy them. A total of $458 million was spent on television advertisements aimed towards youngsters aged 2 to 12. Breakfast cereals, restaurant cuisine, snacks, sweets, frozen desserts, and fizzy beverages were all advertised with the funds. According to a 2007 survey by the Kaiser Foundation, food advertising appears more frequently in children’s programming than in adult programming.

Ads are biased and pervasive

Food and beverage corporations have regulated their marketing to children in order to combat the childhood obesity crisis by lowering the amount of advertising that promote unhealthy foods. However, because youngsters continue to be exposed to unhealthy diets heavy in sugar, fat, and sodium, this self-regulation has had little or no benefit. Food marketers use children’s shows to promote their food and beverage items.

Food adverts take up half of the time allotted for advertisements on such programmes. Fast food, candies, snacks, and cereals are among the most popular items advertised. Fruit juices, fruits, and vegetables get very little attention. Because children are rarely exposed to commercials that promote healthy eating, advertisements are to blame for the obesity pandemic. As a result, biased marketing that promotes unhealthy foods impacts their eating preferences and decisions.

Mikhailova proposes that the government control food promotion using nutritional standards defined by the Food and Drug Administration (FDA). Only foods that fulfil FDA guidelines should be promoted. Obesity increases healthcare expenses and has substantial health repercussions, thus the government should take it seriously. Because of the widespread nature of advertising, especially during shows aimed at children, Mikhailova feels that excessive screen time is a concern. The government should oblige marketing firms to make advertisements that promote healthy eating. If alternative measures of regulation fail, it is the government’s job to pass laws that restrict advertising.

Several research projects have offered arguments in favour of prohibiting food advertisements. Bhamani (933), for example, claims that the solution to the obesity issue is parental participation. In this regard, she advises parents to mould their children’s eating habits and encourage them to participate in physical activities. They should also make sure that their children do not lead sedentary lifestyles. Parents should educate themselves on good nutrition in order to favourably influence their children’s dietary preferences and choices.

They must also avoid behaviours such as excessive television viewing and unhealthy eating habits in order to serve as role models for their children. Poskitt (396), who says that obesity prevention should focus more on changing children’s lifestyles because many treatment programmes do not modify family attitudes and circumstances, which are key causes, supports this position.

Creating rigorous dietary regimens and encouraging youngsters to participate in physical activity are also significant tactics. Children are encouraged to develop inactive lives by urban living. As a result, rather than lowering the amount of time their children spend watching television, parents should focus on modifying their families’ habits to prevent childhood obesity. Obesity prevention, according to Yeow et al. (10, should be founded on a thorough understanding of the core causes.

They contend that obesity is produced by interactions among a number of factors, including the environment, genetics, ethnic disparities, prenatal weight, nutrition, sleep, physical activity, and parental influences. Understanding the primary causes of childhood obesity is critical to controlling the epidemic because it allows for the development of effective preventive and intervention methods. Their reasons refute the claim that prohibiting the sale of certain foods will decrease childhood obesity. They don’t look at the negative consequences of advertising on children’s dietary preferences and behaviour. As a result, their arguments are unpersuasive, as numerous studies proposing the banning of food advertisements have been done.

Obesity in children is a worldwide epidemic and public health problem that affects many children, particularly in affluent countries. The rising frequency of paediatric obesity has been related to a variety of factors. Advertisements are one of the most contentious reasons. On a daily basis, children are exposed to a plethora of food commercials across various media channels. These advertisements have an impact on their food preferences, intake, habits, and decisions.

Because of their innocence and lack of judgement, food marketing businesses target youngsters. They are unable to distinguish between fiction and reality. Furthermore, they are unable to discern the purpose of advertisements as well as the impact of various foods on their health and overall well-being. Governments have implemented a number of policies aimed at reducing child-targeted advertising. These methods, however, have been ineffective in avoiding obesity.

Parents must instil in their children the value of consuming healthy foods and leading active lifestyles. Parents must keep an eye on what their children are watching and limit how much time they spend on various media platforms. Teachers, on the other hand, must raise awareness of the necessity of consuming healthy foods such as cereals, grains, fruits, and vegetables and teach pupils about them. Eating advertisements should be prohibited because they impact children’s food preferences, choices, and behaviours in ways that lead to obesity.