What Are Grits? And How to Make Grits 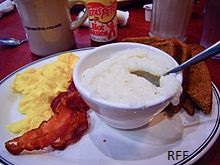 Grits is a cornmeal porridge formed by boiling. Hominy grits are grits prepared from hominy, which is corn that has had the pericarp (ovary wall) removed and has been treated with an alkali in a process called nixtamalization. Grits are frequently served as a breakfast dish with a variety of flavorings. Grits can be savory or sweet, but savory spices are more popular. The meal originated in the South but is now accessible throughout the United States. Grits are frequently served as part of a supper entrée, such as shrimp and grits, which is popular in the South.

The meal was created by the Muscogee tribe of Native Americans, who used corn that was similar to hominy. Native Americans taught American colonists how to create the meal, and it quickly became a national favorite.

Three-quarters of all grits sold in the United States are purchased in the South, in a region known as the “grits belt” that stretches from Lower Texas to Washington, D.C. In 2002, Georgia declared grits to be the state’s official prepared dish. In South Carolina, a bill was sponsored to make it the official state food, but it died in committee. Despite this, South Carolina has a separate chapter of legislation dedicated solely to cornmeal and grits. In South Carolina, state law mandates the enrichment of grits and rice meals, comparable to the requirement for flour.

Depending on the color of the corn utilized, grits might be yellow or white. “Quick” grits, which have had the germ and hull removed, are the most common variety seen in supermarkets. “Speckled” grits are made up of whole kernel grits.

How to Make Cheese Grits Recipe?

Grits are made by whisking together water or milk and cornmeal over low heat. Whole grain grits take a lot longer to soften than “quick grits.”

Some people like their grits sweetened, while others dislike them. They’re frequently accompanied by butter. Grated cheese, sausage, bacon, salt, and pepper, or red-eye gravy are all options.

Leftover grits can be sliced and fried plain or with a breading to make “fried grits,” “fried hominy,” or “grit cakes.”

Grits go well with a number of dishes, including eggs and bacon, fried catfish, shrimp, salmon croquettes, and country ham.

Cooked grits that have solidified can be sliced and fried in vegetable oil, butter, or bacon grease, or they can be coated in beaten egg and bread crumbs first.