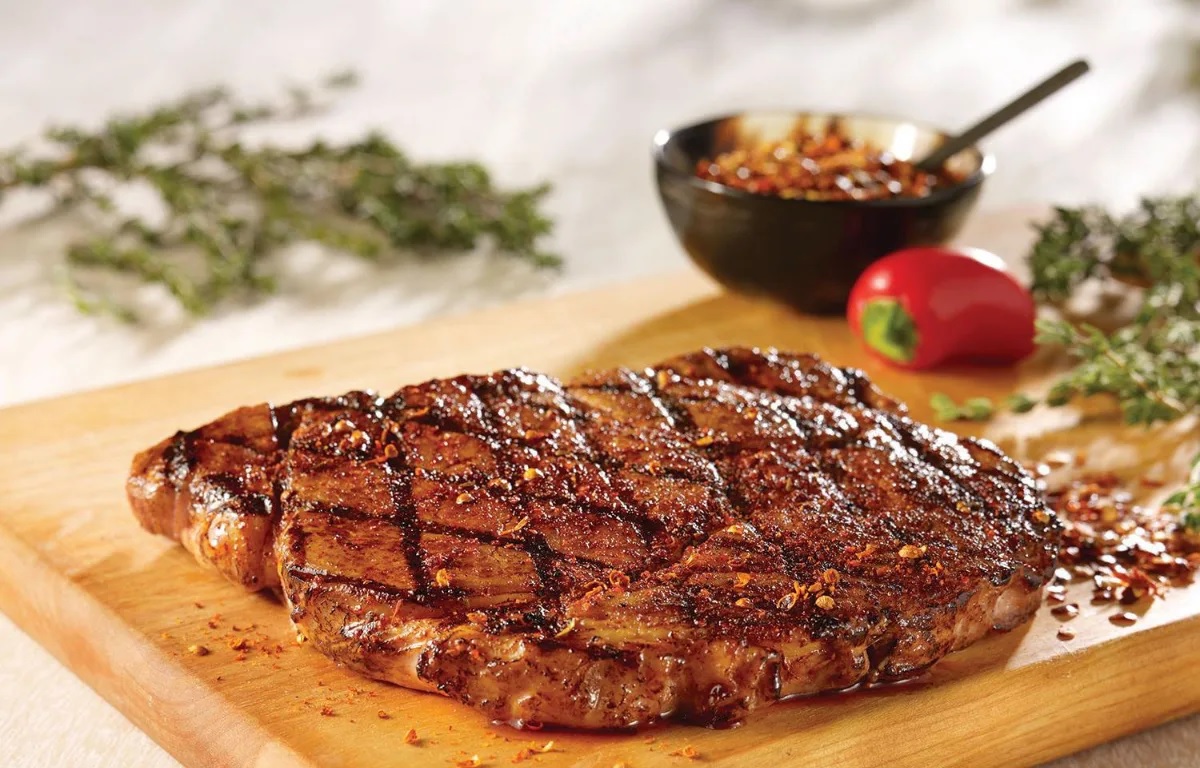 “Beefsteak dinners” were exclusively a man’s world in the 19th century. Up until about 1920, men would pack big rooms, abandon any utensils, and try to eat as much steak and beer as they possibly could.

When did knives and forks become useful? Joseph Mitchell, a writer for the New Yorker, claimed in 1939 that the introduction of salads, Manhattan cocktails, fruit cups, napkins, and cutlery “didn’t take ladies long to pervert the beefsteak.”

Mitchell continued to lament the impact of women on men’s steak consumption in that same article, lamenting that “women do not value a glutton, and at a current beefsteak it is unusual for a man to do away with more than six pounds of meat and thirty glasses of beer.”

Just to be clear, in 1939, moderation was allegedly defined as eating about six pounds of beef and drinking thirty glasses of beer in a single sitting.

Although forks and napkins may not seem particularly manly, their inclusion in the steak-eating equation ultimately turned out to be advantageous (and profitable).

The Steakhouse Chains “became the ultimate New York restaurant, a gruff, comfortable sort of place where individuals could revel in everything they enjoyed about themselves,” according to The New York Times.

Indeed, a contemporary steakhouse offers more than a typical diner or restaurant by the side of the road. When there is a reason to celebrate or on special occasions, we go to steakhouses. The experience at a steakhouse is just as important as the food. Naturally, this frequently results in a higher bill at the end of the night.

There is a darker side to steakhouse chains, just like there is in any other area of the food industry. Discover four unexpected facts about chains of steakhouses by continuing to read.

Also, be sure to read 5 Fast Food Industry Truths That Will Make You Lose Your Appetite.

Outback bills itself as an Australian-inspired steakhouse, however, the brand was really established in Tampa, Florida, in 1988. In fact, none of the founders had even traveled to Australia when the first Outback was established. Their concept for an Australian-themed restaurant is said to have been inspired, at least in part, by the well-known “Crocodile Dundee” movie from 1986.

Borrowing some of the stereotypes associated with Australia is one thing, but what about the food? The menu selections at Outback must be genuine Australian fare, right? Wrong. In Australia, there is no such thing as “the bloomin’ onion” or “shrimp on the barbie.”

Outback’s biggest Australian gaffe, nevertheless, probably occurred in 2017. A brief history lesson: The ancestors of today’s Aboriginal Australians are the people who first inhabited the continent. Or to put it another way, it doesn’t get any more uniquely Australian.

When Outback began promoting their “bloomin’ onion” as an “Outback Ab-original,”

Advertisement
you can understand their wrath. The word was swiftly criticized on social media as offensive and maybe racist. Outback swiftly apologized, but it’s just another illustration of how far away from its purported “inspiration” the business has become.

With over 100 locations across North America, Ruth’s Chris Steak House employs thousands of people, generated $468 million in revenue in 2019, and made a profit of $42 million.

When it was revealed that the corporation had received $20 million (!) in COVID-19 economic “relief money” from the government’s Paycheck Protection Program (PPP) in 2020, people were naturally baffled and incensed.

The PPP, which is run by the SBA, began as a $349 billion fund to assist small firms with fewer than 500 employees in obtaining low-interest loans during the epidemic. That certainly cannot be said of Ruth’s Chris.

Even worse, the PPP ran out of money barely two weeks after it began. What happened to all those billions? To get a share of the money pie, many big firms employed legal loopholes. To “qualify” for two $10 million bonuses. Ruth’s Chris carefully used two restaurant locations with fewer than 500 employees (one per location).

The attention of news organizations was swift. According to GQ, Ruth’s Hospitality Group was successful in applying for two of its hotels to get a maximum of $10 million in PPP loans. Despite the fact that the business claims to have laid off a “substantial number of field and home office team employees.”

Oh, and when the company filed for the PPP loans, it also had $86 million in cash on hand. Ruth’s Chris immediately garnered over 260,000 signatures on a petition, at which point they declared they will repay the $20 million in debt.

Steakhouse Chains, The late, great Anthony Bourdain started out as just another chef attempting to make it in New York City’s seedy restaurant scene. The New Yorker published a piece that Bourdain had written and submitted for consideration in 1999, giving him his big break.

The article, headlined “Don’t Eat Before Reading This,” was frank and enlightening about Bourdain’s experience working in the restaurant business. What he had to say regarding well-done steaks is as follows: For those of us in the industry who are cost-conscious, customers who order their steak well-done provide a useful service by paying for the right to consume our waste.

Bourdain continues by describing the “save for well-done” cooking custom. In general, cooks keep really unappealing steaks—tough. Packed with nerve and connective tissue, of the hip end of the loin. And perhaps a little stinky from age—for when a customer demands a well-done steak.

Of course, that article is older than 20 years. But it appears that the custom of giving customers who want well-done steak less flesh has endured.

When asked if the well-done “myth” is accurate, a former steakhouse employee responded as follows on Reddit a few years ago: “Really? Yes. We separate the steaks so they cook simultaneously at the same temperature. Therefore, you will receive a less desirable cut to cook at the same time as your exceptionally beautiful, rare piece.”

Steakhouse Chains, This restaurant tale demonstrates the truthfulness of the adage “reality is stranger than fiction.” Over 80 steakhouses are run by Saltgrass across the nation. A server at a Saltgrass restaurant in Odessa, Texas, made news in 2018. After she reported that a patron had written a racial comment on their receipt.

As anticipated, Saltgrass promptly issued a statement endorsing its worker. Here’s where things start to get weird.

It was discovered just a few days after the claimed occurrence that the server had made up the entire tale.

Terry Turney, COO of Saltgrass SteakHouse, issued the following statement at the time: “Further inquiry revealed that our employee made up the entire tale, which we discovered. The client has been contacted and extended an invitation to return to our restaurant for dinner. Any form of racism is abhorrent, and should it occur in one of our locations, we always take swift action. Equally upsetting is falsely accusing someone of being racist.”