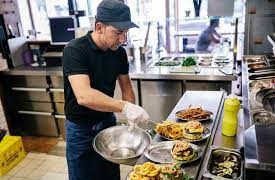 Fast Food Restaurants, You can enter the sometimes pricey food industry at a considerably lesser cost by purchasing a franchise. It’s time to get motivated if you’ve ever desired to manage a restaurant or food franchise.

Try your best not to drool too much when looking at these top 10 fast food restaurants in the UK.

In the UK, Domino’s is the most well-known pizza delivery company. However, the company had modest origins and was initially founded to quickly deliver hot, delicious, freshly baked pizzas to homes.

Currently, Dominos has more than 1,000 locations in the UK and is expanding quickly. This is largely due to the business’s effective franchising concept.

You will participate in a four-week franchise development program if you choose to invest in Dominos, during which time you will learn how to manage the business effectively and with assurance.

Would you like to invest in the most renowned fast-food chain in the world? The world’s most recognizable fast-food brand is probably McDonald’s. The mouthwatering cheeseburgers, Ronald McDonald clown as the restaurant’s mascot, and McFlurrys are the restaurant’s main draws.

But if you want to succeed financially with a McDonald’s franchise, you’ll need to be dedicated and persistent. Any prospective franchises must attend at least one “insight day” before beginning an application, which can take three to six months in total.

Additionally, McDonald’s is quite picky about who it accepts into the brand. Your chances of obtaining a franchise with McDonald’s are significantly increased if you have a solid background in management or corporate environments and the necessary skills to operate a busy restaurant with up to 70 patrons.

From one fast-food behemoth to the next. Similar to McDonald’s, KFC is a well-known brand with approximately 14,000 locations throughout 112 nations. The company is well-known for its fried chicken, which is cooked using the Colonel’s special recipe.

There are currently 850 KFC restaurants in the UK, with the first one having initially opened its doors in 1965.

You can purchase a franchise for one of four different types of KFC restaurants. These include standard eateries found in city centers, drive-through eateries situated along highways and in shopping centers, food courts in malls, and express stores found in residential neighborhoods.

While KFC isn’t presently looking for new franchises, keep an eye on this page in case the chance to manage one of the most well-known fast-food businesses in the world reopens.

Papa Johns was first established in the US in the 1980s, and after expanding to the UK in 2000, the company now has more than 5,000 locations in 45 different countries.

Consider contacting the brand if you’re searching for a piece of the action, have strong communication skills, and have experience in the business world.

Ingenious businesspeople with a love for providing clients with mouthwatering hot sandwiches are sought after by Subway. If you want to be considered for franchising with Subway, you should have the industry knowledge and exhibit effective time-management and communication techniques.

Lacking funds for investments? You might be able to receive assistance from one of Subway’s financial partners. Therefore, if you have strong credit, you can acquire bank loans that can cover up to 70% of the cost.

Wolf serves tasty, wholesome Italian street food made with fresh, regionally sourced ingredients. The brand, which was founded in 2015, is proud of its premium meals.

For instance, all of the meat used is sourced from nearby farms that uphold high standards for animal welfare. For a superior flavor, it is additionally tenderly marinated for at least 24 hours.

Consider opening a Wolf franchise if you’re passionate about providing consumers with scrumptious Italian food on the go.

The UK’s most well-known dish, fish and chips, is the main emphasis of the fast-food restaurant brand Harry Ramsden.

The popular British dish features chunky chips tossed in salt and vinegar (or other condiments of your choice) and fried fish baked in batter. It’s perhaps one of the most well-liked takeout meals in the nation, and there’s a good reason for that: it’s comfort food at its finest.

There are 40 franchise locations in the UK, so if you’re interested in providing hungry locals and tourists with hearty fish and chips, think about becoming a franchisee with the company.

The first Nandos restaurant opened its doors in South Africa. Established in 1987, there are currently more than 1,000 restaurants in 35 nations.

The brand is incredibly popular in the UK and is known for its mouthwatering peri chicken. There are more outlets than in any other country on the globe, totaling over 400 eateries spread out across the nation.

Another well-known restaurant franchise in the UK is Zizzi’s. More than 140 restaurants serving Italian-inspired food are operating in the UK under this name.

The restaurant’s famous Rustica pizzas are hand-stretched to provide a large, thin, and crispy foundation that is ideal for piling on mouthwatering toppings.

The United Kingdom is home to the Italian-American restaurant brand Frankie & Benny’s.

Throughout 1995, the city of Leicester saw the opening of the first restaurant; today, the brand has 250 locations in the UK.

A franchise with Frankie & Benny’s can be a perfect choice for you if you enjoy robust Italian-American cuisine and delectable desserts.